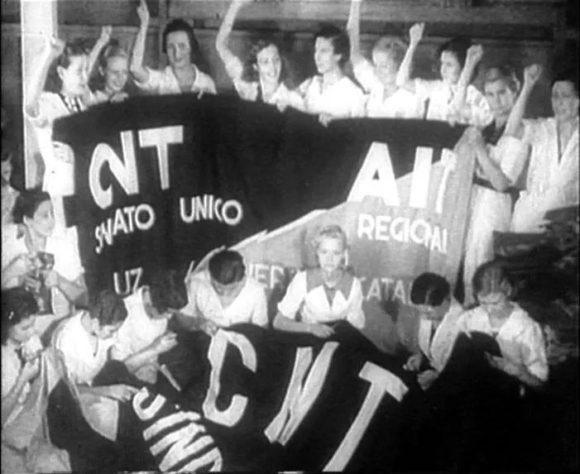 Mujeres Libres, also known as Free Women of Spain was an anarchist women’s organization in Spain that aimed to empower working class women. Initiated in 1936 by Lucía Sánchez Saornil, Mercedes Comaposada, and Amparo Poch y Gascón, it had approximately 30,000 members. The organization was based on the idea of a “double struggle” for women’s liberation and social revolution and argued that the two objectives were equally important and should be pursued in parallel.

In revolutionary Spain of the 1930s, many anarchist women were angry with what they viewed as persistent sexism amongst anarchist men and their marginalized status within a movement that ostensibly sought to abolish domination and hierarchy. Conditions for Spanish women before the Spanish revolution were oppressive, in the sense that they could be forced into arranged marriages without their consent and single women were not allowed to leave their homes without a male chaperone. Furthermore, working conditions were difficult for women because their salaries were half what male workers received. The limited rights allowed to women were only offered to middle and upper class women, and not offered at all to the working class.

The founders of Mujeres Libres were all active in the Libertarian movement, however they were dissatisfied with the way the movement addressed the particular problems that confronted them as women. Women felt that, despite their cries for equality, their male activist counterparts did not treat women as equals. The general sentiment was that:

All those companeros, however radical they may be in cafes, unions, and even affinity groups [FAI], seem to drop their costumes as lovers of female liberation at the doors of their homes. Inside, they behave with their companeras just like common “husband.”

Even though women were involved in many of the unions and movements, like CNT and FAI, they were minorities. They were often disregarded or their participation unacknowledged, whether due to sexism or hesitation of women to get involved. Men, generally, didn’t take women seriously in the public or the political contexts. At meetings of groups, like the FIJL, women were laughed at before they even spoke. This occurred despite the fact that organizations like the CNT held the official view that men and women were to be treated equally at home and in the movement. The beliefs within the libertarian community was that “the two sexes will be equal, both in rights and in obligation.” The Mujeres Libres did not identify as a feminist organization rather they saw women’s problems as inseparable from the social problems of the day; while they shared their compañeros’ desire for social revolution they also pushed for recognition of women’s abilities and organized in their communities to achieve that goal.

In 1935 in Madrid, two women began to form their own organization to educate women in political current event, anarchist ideology and women’s rights. Lucia Sanchez Saornil was a writer and poet who had been active in union groups in Barcelona until she moved to Madrid and met Mercedes Composada. Composada was a lawyer and had grown up in leftist household with a socialist father. Both women had tried to be active in groups like CNT but were frustrated with the way women were treated by the militants. Together they formed the Mujeres Libres and became the editors for their magazine, which focused on the anarcho-syndicalist movement and the education of women. Another person involved was Lola Iturbe. They were later joined by Amparo Poch y Gascon, a physician who promoted greater sexual freedom for women and challenged ideas of monogamy and the sexual double standard. Meanwhile, in Barcelona, Soledad Estorach, an active union member, felt that the unions did not adequately engage women and formed her own group, the Grupo Cultural Feminino. In 1936, the two groups discovered each other’s existence. Compasada travelled to Barcelona and after meeting the Grupo Cultural Femenino; they united into the Agrupacion Mujeres Libres, creating a National federation

Fists upraised, women of Iberia
towards horizons pregnant with light
on paths afire
feet on the ground
face to the blue sky.

Affirming the promise of life
we defy tradition
we mold the warm clay
of a new world born of pain.

Let the past vanish into nothingness!
What do we care for yesterday!
We want to write anew the word WOMAN.

Fists upraised, women of the world
towards horizons pregnant with light
on paths afire
onward, onward
toward the light.