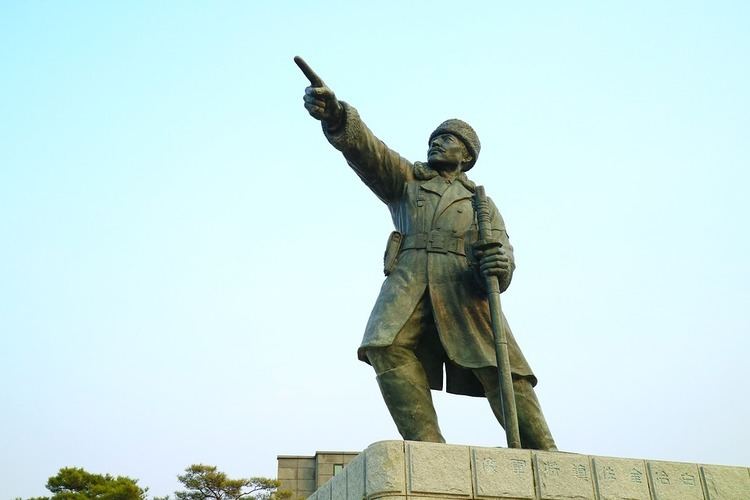 Kim Chwa-chin or Kim Jwa-jin (December 16, 1889 – January 24, 1930), sometimes called the “Korean Makhno” or by his pen name Baekya, played an important role in the attempt of development of Anarchism in Korea.

Kim was born to a wealthy family of the Andong Kim lineage in Hongseong County, Chungcheong province. His father was Kim Hyeong-gyu. When Kim was 18, he released 50 families of slaves when he publicly burned the slave registry and provided each family with enough land to live on. This was the first emancipation of slaves in modern Korea.

Kim Chwa-chin, had recognised and fought against Japanese imperialism from an early stage. In 1919 Kim established the Northern military administration office army (북로군정서군, 北路軍政署軍). General Kim lead the Korean Righteous Armies in the Battle of Cheongsanni.

Afterward General Kim was appointed as the chairman of an executive committee at the age of 38 and attempted to integrate the Independence Movement groups in China and Manchuria. When anarchist and nationalist groups founded a rebel community in Manchuria in the province of Shinmin in 1929, Kim Chwa-chin was chosen to lead its armed forces. He was charged with organizing and leading guerrilla attacks on the Japanese. Though the Japanese soldiers were far more experienced and better armed than Chwa-chin’s band, Kim’s attacks were successful both in defending the young anarchist community of Shinmin, and in encouraging other groups in northeast Asia to resist the occupiers.

Kim Chwa-chin was assassinated in 1930 while repairing a rice mill the Korean Anarchist Federation had built in Shinmin. Although his assassin was never found, the assassin’s handler was caught and executed.

After the assassination of Kim Chwa-chin, the anarchist movement in Manchukuo and Korea became subject to massive repression. Japan sent armies to attack Shinmin from the south, while the former allies, the Chinese Soviet Republic, attacked from the north. By the summer of 1932, Shinmin’s most prominent anarchists were dead, and the war on two fronts was becoming untenable. The anarchists went underground and anarchist Shinmin was no more.

As a leader of the Korean independence movement, Kim is remembered in both North and South Korea. In 1991, the town of Hongseong restored his birthplace. A festival is now held in his honor every October.