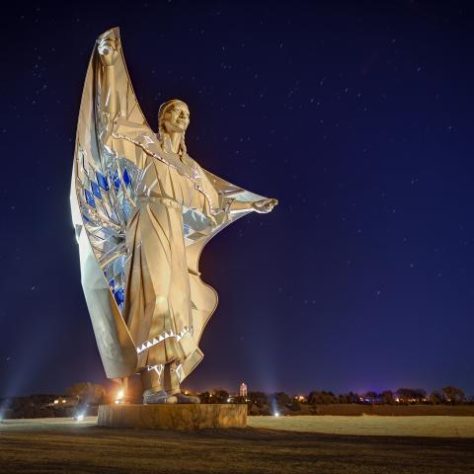 Dignity represents the courage, perseverance and wisdom of the Lakota and Dakota culture in South Dakota

The sculpture honors the culture of the Lakota and Dakota peoples who are indigenous to South Dakota.

Three Native American women from Rapid City, SD served as the models for the sculpture. The artist began by first drawing the form and then sculpting a one-eighth-scale model. The sculpture was created in an isolated area near the Cheyenne River, east of Rapid City, SD, and later moved to the installation site.

Artist Lamphere’s plan is to put the name of every federally recognized tribe on a stainless steel band around the base of the statue. He said, “I wanted something that would really honor the indigenous people of the Great Plains and I kept that in mind all the time. I made the work reflect the name that it has of “Dignity, and I think that’s part of what makes it work so well.