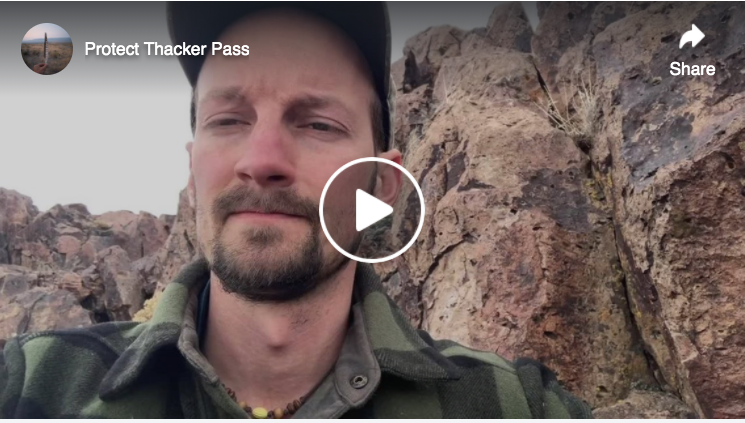 Activists Occupy Site of Proposed Mine That Would Yield 25% of World’s Lithium Supply, a Key Ingredient in Electric Car Batteries

Lithium is the miracle element powering your smartphone and under the hood of every electric car. But will batteries save the planet or cause more harm? The controversy is heating up in Nevada.

RENO, Nevada — Activists aiming to stop Lithium Americas’ Thacker Pass open-pit lithium mine – what would be the United States’ largest lithium mine – launched a permanent protest encampment hours after the Bureau of Land Management gave final approval to the mine on January 15. The Thacker Pass project, located in northwestern Nevada, would provide 25% of the world’s lithium, a key ingredient for electric car batteries.

Despite winter conditions at Thacker Pass, protestors have erected tents, a wood stove, and protest signs. Lawyer Will Falk, who is on site, says they mean to stay for as long as it takes to protect this old-growth sagebrush mountainside.

“Environmentalists might be confused about why we want to interfere with the production of electric car batteries,” says Falk. “But, it’s wrong to destroy a mountain for any reason – whether the reason is fossil fuels or lithium.”

Max Wilbert, another organizer of the protest and author of Bright Green Lies, a book analyzing the environmental harms of renewable energy projects, says: “To protect what’s left of the natural world, we must leave minerals in the ground – not just oil and gas – and learn to live within ecological constraints as respectful members of natural communities. Humans must learn to live with less. Or, we will not live at all.”

Activists will remain in place and block all construction, mining, and road-building activities. They demand:

1.    The establishment of a protected area at Thacker Pass preserved for the enjoyment of future generations, for wildlife, and for water quality;

2.    Lithium Americas’ immediate abandonment of the Thacker Pass project; and

3.    A sincere apology from Lithium Americas Corporation for claiming that the project is “green.”

The Thacker Pass mine proposal, located roughly 130 miles northeast of Reno, is one of a handful of large mining and energy projects fast-tracked by the outgoing Trump administration in what a December article in the New York Times called an “intense push” to “find ways to increase domestic energy and mining production.”

Though Lithium Americas claims it strives “to build a business where the well-being of the local community is essential to its success,” this mine has faced objections from local residents, tribal members, ranchers, and environmental groups, who are concerned about project impacts on wildlife and rural quality of life.

Lithium Americas plans to build large tailing ponds for toxic waste, drill new wells, build a sulfuric acid processing plant, import more than 170 semi-loads of sulfur (a byproduct from oil refineries) per day, pump 850 million gallons of water annually, and dig an open pit of more than 2 square miles into the Thacker Pass mountainside. Despite Lithium America claims that this will be a “carbon neutral” mine, the project will burn some 26,000 gallons of diesel fuel per day.

Please keep me posted on events and activities related to protecting this area.
Regards,
Brian

If your arguement is correct that we must “learn to live within ecological constraints as respectful members of natural communities” it seems odd to me that your group would set up camp with a wood burning stove to heat your tents….polluting the environment.
I have followed a great number of your arguments and I can’t help but feel that you look at the world in black and white. For example: You make the claim that EV ‘s are a problem because the electricity is often made by burning coal. I agree with you that this is a problem. But the answer is not to find fault with electric cars. The answer is to make sure we can find a better and cleaner way to make electricity.
I am left with the impression that your group just hates any type of power generation. You find fault with windmills, solar panels, hydro etc etc.
At the same time you seem to think that heating your tents with stoves that burn wood is ok because you need heat.
I’m not impressed. We need open minded discussion on how to make our planet a better place for the future of our children. The world is not black and white.