I have picked up a new obsession. No, that word is a little too harsh, let’s say I have begun collecting rare and unique radical board games (So if you know where some are please let me know) and I just received a new one today.  I have also added a ‘games’ section to the A Radical Shop, in case you are interested.

Mai ’68 is a game that allows you to relive the early days of May 1968, to be on the side of the student and school kid protestors, or the side of the forces of law and order.  The principal events that detonated the general strike that would follow are potentially present in this game.  However, the outcome of the game could be quite different from reality.  Everything depends on the skill and the temperament of each player. 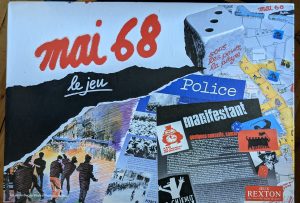 In Mai ’68 the Police and the Protesters are played quite differently.  It will be necessary to put yourself in the skin of the side you are playing.  Feel the spirit of Mai ’68.  The Protesters of Mai ’68 are not the Red Brigades and the CRS do not receive their orders from Pinochet or Jaruzelski.  That does not mean that there are not several ways to win.

What was at stake?  Even if the confrontations were sometimes very violent, they did not conform to military logic.  After all, this was a confrontation of two political forces: that of Gaullist authority with a protest movement which, starting with the lycées and facultés, progressively gained much wider support.  The role of the Police player is to maintain respect for the authority of the state and to isolate the protesters.  The role of the Protester player is to reinforce the movement by spreading the strike and to defy authority by occupying the streets.

In the game, the Protesters win if they succeed in erecting a significant number of barricades.  If they fail in their objective, the Police win the game.  Discover the beach beneath the paving stones or make the roads safe for traffic: such is the struggle between Utopia and Order.

The board represents the Latin Quarter (the fifth and sixth districts) of Paris. Except for the avenues on the banks of the Seine and those that border the Quarter, all the road spaces are removable. Beneath them, you will find the design of an imaginary Paris where the beach has replaced the paving stones. To make the de-paving of the streets easier, a plastic lever has been provided with the game.

In May 1968 hundreds of slogans flowered on the walls of Paris. They became one of the most effective weapons of the movement. You will find one on the underside of each street space.

To assemble the two halves of the board, place the two halves together and secure them with the two butterfly-shaped pieces. Next, assemble the puzzle of the Latin Quarter. At the end of the game, leave all the street pieces in place and store the two board sections on top of each other in the box. In this way, you won’t have to redo the puzzle every time. The buildings are never removed from the board so you may wish to stick them down with a little glue. Puzzle fans will want to leave the board just as it is. 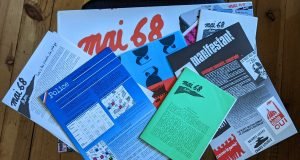 Aim of the Game

If at any time there is no Protester piece in play or due to appear as a reinforcement, the Police player gains an immediate victory. 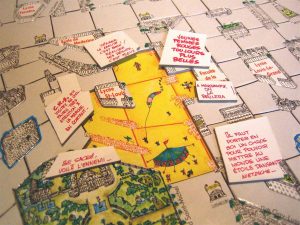 The police player starts the game by moving their pieces. They may move as many or as few as they wish. Pieces in commissariats can exit onto any adjacent street space. Pieces at the Préfecture de Police may leave as indicated by the arrows.

When police movement is complete, the Protester player takes their turn. Their pieces may travel on foot or by the Métro. At the end of each Protester turn, the clock piece is moved forward in one space. The game ends at the end of the eighth turn (4 a.m.), or sooner if one of the players meets their victory condition.

On the first turn, no combat is allowed, no Molotov cocktails may be thrown and no political cards can be played.

On later turns, both players may initiate combat. Movement and combat are separate. A player must complete all movement before beginning combat. It is not possible to move your pieces or attack during your opponent’s turn.

Beginning in May 1968, a period of civil unrest occurred throughout France, lasting some seven weeks and punctuated by demonstrations, general strikes, as well as the occupation of universities and factories. At the height of events, which have since become known as May 68, the economy of France came to a halt. The protests reached such a point that political leaders feared civil war or revolution; the national government briefly ceased to function after President Charles de Gaulle secretly fled France to Germany at one point. The protests spurred movements worldwide, with songs, imaginative graffiti, posters, and slogans.

The unrest began with a series of student occupation protests against capitalism, consumerism, American imperialism, and traditional institutions. Heavy police repression of the protesters led France’s trade union confederations to call for sympathy strikes, which spread far more quickly than expected to involve 11 million workers, more than 22% of the total population of France at the time. The movement was characterized by spontaneous and decentralized wildcat disposition; this created contrast and at times even conflict internally amongst the trade unions and the parties of the left. It was the largest general strike ever attempted in France, and the first nationwide wildcat general strike.

The student occupations and general strikes initiated across France were met with forceful confrontation by university administrators and police. The de Gaulle administration’s attempts to quell those strikes by police action only inflamed the situation further, leading to street battles with the police in the Latin Quarter, Paris.

However, by late May, the flow of events changed. The Grenelle accords concluded on 27 May, between the government, trade unions, and employers won significant wage gains for workers. A counter-demonstration organized by the Gaullist party on 29 May in central Paris gave De Gaulle the confidence to dissolve the National Assembly and call for parliamentary elections for 23 June 1968. Violence evaporated almost as quickly as it arose. Workers went back to their jobs, and when the elections were held in June, the Gaullists emerged stronger than before.

The events of May 1968 continue to influence French society. The period is considered a cultural, social, and moral turning point in the history of the country. Alain Geismar—one of the leaders of the time—later stated that the movement had succeeded “as a social revolution, not as a political one.”

*about May 1968 lifted from Wikipedia, you can read more detail there.

I’m obsessed with this game already but I can’t find it anywhere on the internet for purchase! Where could I get one of these beauties?