Locations, Zapatistas, Vegan Germany, and What is Next?!

Nine weeks ago, A Radical Guide had a soft launch and invited you to help identify bugs, add your listings and, in short, help build this site together with us.  In this short time, I have met people from all over the world and have had great conversations.  We have people post listings from Germany, Australia, Mexico, United States, Canada, Iceland, and the locations are still coming in as I write this post. 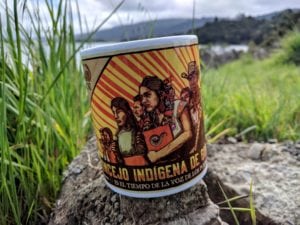 In fact, someone (I would mention their name, but I didn’t ask before writing this post, so I will leave their name out) who found the listing for Café ZAPATA VIVE  on A Radical Guide before they visited Mexico City.  On their trip, they went to Café ZAPATA VIVE and before leaving they got me a CNI/CIG (The National Indigenous Congress (Congreso Nacional Indígena CNI, its initials in Spanish) / the Indigenous Government Council (CIG) mug from the location.

The mug reads, “Indigenous Government Council” and below those words, it reads, “It is time of the voice of the people”

As you know from the Café ZAPATA VIVE listing, that Café ZAPATA VIVE is a collective project, that was born as a symbol of RESISTANCE and REBELLION against capitalism and globalization; but above all, it is born to support the Zapatista communities and the EZLN, which are worthily resisting exploitation, dispossession, repression, and contempt for bad government; and that despite everything, they build with a lot of dignity, territory, and community.

The CNI is The National Indigenous Congress (Congreso Nacional Indígena, CNI) is an organization of communities, nations, towns, neighborhoods, and indigenous tribes of Mexico. In its own words, the CNI is “… a space of unity, reflection, and organization of the indigenous peoples of Mexico, promoting the integral reconstitution of the original peoples and the construction of a society in which all cultures, all the colors, all the towns that we are Mexico.

The Indigenous Governing Council (CIG) is an initiative of the National Indigenous Congress (CNI) and the Zapatista Army for National Liberation (EZLN), created through a referendum approved by 523 communities in 25 different Mexican states and proposing to collectively govern the country according to the CNI/EZLN’s seven principles of “Rule by Obeying.”  The CIG represents 42 indigenous peoples and 39 indigenous language groups—the majority of originary peoples in the country—and proposes to organize the (self)government, healthcare, education, and defense of indigenous and non-indigenous communities across Mexico. (source: http://enlacezapatista.ezln.org.mx/) 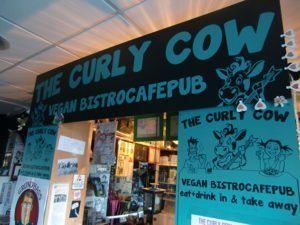 I state this information to highlight not only how important it is to know what is going on in Mexico, to support indigenous communities, but to also highlight the gratitude I have for the gift brought back from Café ZAPATA VIVE.

In addition to the gift from Mexico, and the listings posted on the site, The Curly Cow, a vegan establishment in Witten, Germany sent us photos of A Radical Guide sticker up on the wall inside The Curly Cow.   We are super excited to see the response that is being generated around A Radical Guide.  You can see the other photos they sent on The Curly Cow listing.

What is Next for A Radical Guide?

Here is what is on the horizon.  I still consider A Radical Guide in soft launch mode. I would like to have at least 100 postings on the site before the official launch (at the time of writing this post, we are at 41 listings).  The space between where we are with the count on listings and 100 listings, I will be working on populating ‘A Radical Shop‘.   I would like to offer materials that go deeper about the locations listed on A Radical Guide and make it easy for people to have access to this material.  Currently, in the shop, we offer a free download of Gene Sharp’s book, Self-Liberation: A Guide to Strategic Planning for Action to End a Dictatorship or Other Oppression, The Practical Anarchist: Writings of Josiah Warren, and A Radical Guide vinyl stickers.

I will continue to travel to locations to document the locations, upcoming locations include, Moscow, Ohio, and Oslo, Norway – so stay tuned, but most importantly, post your locations!

Thank you for your support in building this community and look forward to what the future will bring!