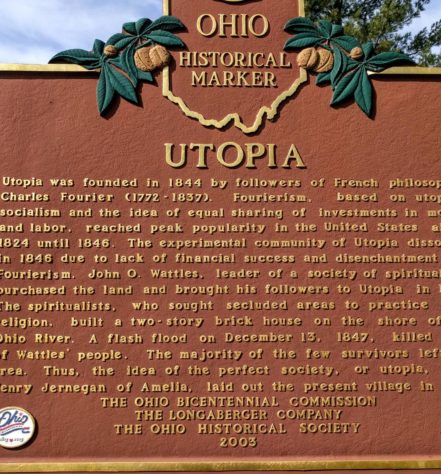 Utopia, Ohio has a long history of different groups establishing a settlement here, on the northern bank of the Ohio River in the southeast corner of Clermont County, in southwest Ohio.

One of the most successful established settlement was in 1874, when anarchist, Josiah Warren purchased the location from the failed community founded by group of Spiritualists.  There were three communities who attempted to establish here, the third being founded by Josiah Warren.

Personal invitation from the first settlers was required for admission to the community, with Warren reasoning that the most valuable individual liberty was “the liberty to choose our associates at all times.” Land was not owned communally, but individually, with lots being bought and sold at cost, as required by contractual arrangement. The economy of the community was a system based upon private property and a market economy where labor was the basis of exchange value (see mutualism). Goods and services were traded by the medium of labor notes. By the mid-1850s, the community eventually came to contain approximately forty buildings — about half of which were of an industrial nature. Also present were two time stores.

Times stores were an created from the ideas of Josiah Warren. He believed, “Cost the limit of price,” with “cost” referring the amount of labor one exerted in producing a good. Believing the labor is the foundational cost of things, he held that equal amounts of labor should, naturally, receive equal material compensation. He set out to examine if his theories could be put to practice by establishing his “labor for labor store.” If his experiment proved to be successful, his plan was to establish various colonies whose participants all agreed to use “cost the limit of price” in all economic transactions, hoping that all of society would eventually adopt the tenet in all economic affairs.

In the store, customers could purchase goods with “labor notes” which represented an agreement to perform labor. The items in the store were initially marked up 7% to account for the labor required to bring them to market with the price increasing the longer the time that a customer spent with the shopkeeper, as measured by a timer dial; later this markup was reduced to 4%. Corn was used as a standard, with 12 pounds of corn being exchangeable with one hour of labor. The result of the system was that no one was able to profit from the labor of another — every individual ostensibly received the “full produce” of his labor. Adjustments were made for the difficulty and disagreeableness of the work performed, so that time was not the only factor taken into consideration. Warren also set up boards on the wall where individuals could post what kind of services they were seeking or had to sell so that others could respond, and trade among each other using labor notes.

On Warren’s last visit to Utopia, Ohio, in the winter of 1855-1856, he remarked:
My visit to that little germ of Equitable society, now eight and a half years old, has given me higher hopes and expectations than I had before dared to entertain. It is not the display that the little group of buildings makes to the eye… but knowing the means by which these… have been acquired, and seeing that there the subject of Equity has had eight years and six months deep study and practical trial, and that from the beginning… the subject had lost nothing with those who first took hold of it… but had gained… from year to year in their highest judgement and affectionate regard.

To learn more about Josiah Warren or Utopia, Ohio, pick up a copy of ‘The Practical Anarchist: Writings of Josiah Warren‘ in A Radical Shop.