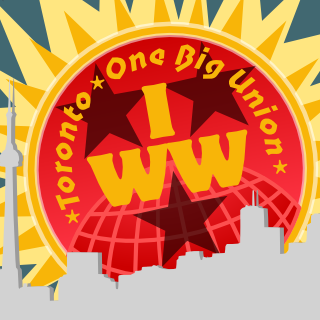 Toronto Industrial Workers of the World

The IWW is a union for all workers, a union dedicated to organizing on the job, in our industries and in our communities both to win better conditions today and to build a world without bosses, a world in which production and distribution are organized by workers ourselves to meet the needs of the entire population, not merely a handful of exploiters.

We are the Industrial Workers of the World because we organize industrially — that is to say, we organize all workers on the job into one union, rather than dividing workers by trade, so that we can pool our strength to fight the bosses together.

Since the IWW was founded in 1905, we have recognized the need to build a truly international union movement in order to confront the global power of the bosses and in order to stand in solidarity with our fellow workers no matter what part of the globe they happen to live on.

We are a union open to all workers, whether or not the IWW happens to have representation rights in your workplace. We organize the worker, not the job, recognizing that unionism is not about government certification of employer recognition but about workers coming together to address our common concerns. Sometimes this means striking or signing a contract. Sometimes it means refusing to work with unsafe equipment or following the bosses’ orders so literally that nothing gets done. Sometimes it means agitating around particular issues or grievances in a specific workplace, or across an industry.

Because the IWW is a democratic, member-run union, all policy decisions are made by referendum. The IWW has just one (modestly) paid officer, the General Secretary-Treasurer. The seven member General Executive Board is elected annually by the entire membership. All officers may be recalled by referendum. IWW workplaces and branches make their own decisions about bargaining and strategy.