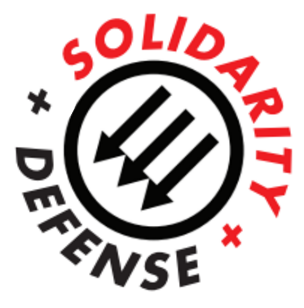 Now Is the Time for Solidarity & Defense

We are a network of people committed to providing solidarity and defense to communities under attack. We organize along directly democratic and participatory lines and are independent of all political parties and their affiliated groups.

We believe in and support people young and old; queer and gender non-conforming; immigrants and refugees; working people, students, the poor; indignados; the ungovernable and those seeking a new society. We remember Trayvon Martin. We fight alongside the Standing Rock Water Protectors and the people of Flint who struggle against the poisoning of our water. We stand with the New York Transit Workers Alliance and the masses at airports demanding to be reunited with their families. When we work together to realize a world where we can live and love as equals, we practice solidarity.

We are Solidarity & Defense Michigan and in order to live and love, we must fight!

Where Do We Begin?

We have already begun. We are currently witnessing a mass groundswell of people refusing to remain silent. We know that no one is coming to save us. It is ourselves alone, the mass of people under attack, that will turn the tide. Networks and defense committees are being organized for the social struggle ahead: to build solidarity with and between all those communities under attack and to engage in active and direct defense. We seek to expand and continue this work.

How Do We Begin?

Solidarity is our best defense. We prioritize the following areas of action
and methods:

– Immigrant and refugee defense.
We participate in campaigns against the government’s deportation squads

– Reproductive Freedom.
We support people’s right to choose and any active resistance to
defend that choice.

– Solidarity with and defense of survivors of abuse and assault.
We rely on personal networks to provide support to victims of abuse.

– Public Education.
We support and participate in teachers, students and parents organizing in the school systems.

– Eviction Defense.
Housing is a matter of justice. We intend to keep people in their homes

It is clear that the State is not going to protect us against assaults to our human rights. We must organize response networks to support our families, neighbors and communities who are facing increasing attacks. S & D Michigan is organizing to develop a system of rapid alert in the event of fascist organizing, racist, homophobic, sexist attacks in schools, immigration raids, etc. with the purpose of mobilizing as many people as we can to assist each other in responding to these emergencies.

S & D Michigan organizes to help empower people to take control of their own learning and use education as a tool in the fight for social change. As the right continues to provide “alternative facts” we must aggressively counter the suppression of knowledge with creating opportunities to educate each other on issues that affect our communities. Our networking and education is aided by public events such as discussion groups, film showings and cultural events. We see Popular Education as one way to create space to learn about former and current political struggles as we organize in today’s repressive environment.

We believe it is important to develop a database of resources, organizations, movements, and so on, with the purpose of expanding the network and being able to respond more effectively. This would also involve tracking legislation, political movements, and fascist organizing, among other things. The more informed we are, the stronger we can be in our organizing efforts.