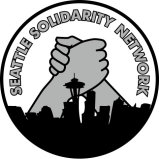 Who or what is Seattle Solidarity Network?

We are a network of volunteers, open to workers both employed and unemployed, active and retired.

What have we done?

Bert got his rental deposit stolen. He and a group of Solidarity Network supporters visited the property manager at her home one morning, and within a few days she paid up.Jorge was owed $892 of wages, and the boss adamantly refused to pay. Jorge and a group of other workers visited the boss’s house, then leafleted the boss’s church twice on Sunday mornings. After that, the boss agreed to pay Jorge every cent.

Stephanie, Yvette and other long-term motel residents demanded relocation assistance when they were ordered out of their homes at short notice. Organized with the Solidarity Network, motel tenants and supporters defied eviction threats, visited the landlords’ neighborhood and launched an online and on-the-streets boycott campaign. Within a month the landlords met all our demands, paying 3-months’ rent per household to all residents who got involved.A whole bunch more.

Why are we doing this?

Each of us at some time has suffered from unjust treatment by employers, landlords, or other wealthy people who hold power over our lives. We’ve learned from experience that the only way we’ll be treated fairly, equally, and with dignity is by being prepared to stand up to such people and defend our rights. It’s hard to do this alone. That’s why we’ve come together, and we’re seeking out other local people with similar problems who feel the same way.

Together we can find ways of dealing with abusive bosses, greedy landlords, and those who would deny us, our friends, families, neighbors and co-workers the right to a decent life.What is our vision?We see our efforts as helping to build a powerful and democratic working class movement.

One day we will be strong enough to take full control over our lives.Where do we get our funding?Seattle Solidarity Network has no source of steady funding except for small contributions from individual supporters. These contributions pay for meeting space, flyers, picket signs, and various other occasional expenses.

What are the politics of the Solidarity Network?

SeaSol is based on the principles of anarcho-syndicalism. People of all political affiliations are welcome to participate. We are anti-authoritarian and anti-capitalist.

How can I be involved in the Solidarity Network?

Come to actions such as picketing a boss, visiting a landlord, or whatever it takes. Volunteer to do work such as gathering information or distributing flyers, and come to weekly meetings. Organize by meeting with, educating, and mobilizing fellow workers and tenants to participate. Plenty of other things, too.

Are we social workers or lawyers?

What is our position towards racism, sexism, racism, homophobia and other bigotry?

All of us have the right to be treated equally and with respect. When a boss, a landlord, or an institution discriminates against our fellow workers and tenants, we believe in fighting back. Also, racism, sexism and homophobia do not belong within the Solidarity Network. Prejudice only divides us and makes us weaker. When someone fighting alongside us has prejudiced ideas, we don’t turn them away, but we will work to change their minds.

What is the Solidarity Network’s organizing model?

We have adapted the IWW’s organizing model (“A-E-I-O-U”) because we think it’s a good one. Come to an organizer training to find out more.

Ask questions to find out what someone’s key problem/issue is, and get them to tell an emotionally powerful story about how the problem affects their life.

Help them understand, using examples from other fights, how we solve the problem through collective action.

Prepare them for what the other side (or others) might do or say.

Ask them to help out with specific tasks that contribute to winning the fight, and follow up to offer support and make sure it gets done.

Get them out to actions—for their fight and others—and get them fully participating in the Solidarity Network.

How do we know a tenant or worker is telling us the truth?

In our experience bosses, landlords, and people in authority generally are more likely to lie than ordinary workers and tenants. This is not because they are any less human, but because they are in positions of power that make it so much easier for them to get away with it. The bosses’ and landlords’ stories often change. This happened, for example, during the T.I.G. fight. After we delivered the demand letter, we were contacted by the boss, who said he did not owe any unpaid wages to Young. Then he said he didn’t owe the full $500.

Finally, he admitted he owed the full amount.When first meeting with workers/tenants about a conflict with their employer or landlord, we critically examine their story. During this meeting, the SeaSol members present can take as much time as necessary to listen, ask questions, and get a feel for the people we might begin working with.

Often, the workers/tenants have some documentation about the situation surrounding their conflict. After the meeting, the SeaSol members present get together to discuss what they think of the possible new fight and their impressions of the workers’/tenants involved.We take time to decide whether to take on the fight, and allow for questions. SeaSol as an organization must vote to take on a new fight. This vote usually occurs after further discussion at one of our weekly meetings, when anyone present can ask for more information and express opinions or concerns.We give the boss/landlord time to respond. At the beginning of each fight, we deliver a demand letter that tells the boss or landlord what the problem is, how they can fix it, and how long they have before we will take further action. During this interim period before the pressure campaign begins, if the boss/landlord expresses any plausible denial of the facts, we investigate it.

This rarely happens. We don’t have a lot to offer con artists. It’s impossible to have 100% irrefutable proof that what someone is saying is true, and some tenants and workers obviously can and do lie. Despite all our precautions, a real con artist could probably fool us. But what would be the point? An expert con artist would have much better and easier ways to make money than starting a small-scale direct action campaign with a bunch of poor people. We can rest assured that these serious crooks will probably stick to injuring themselves at Wal-Mart, and leave SeaSol to fight over real injustices.