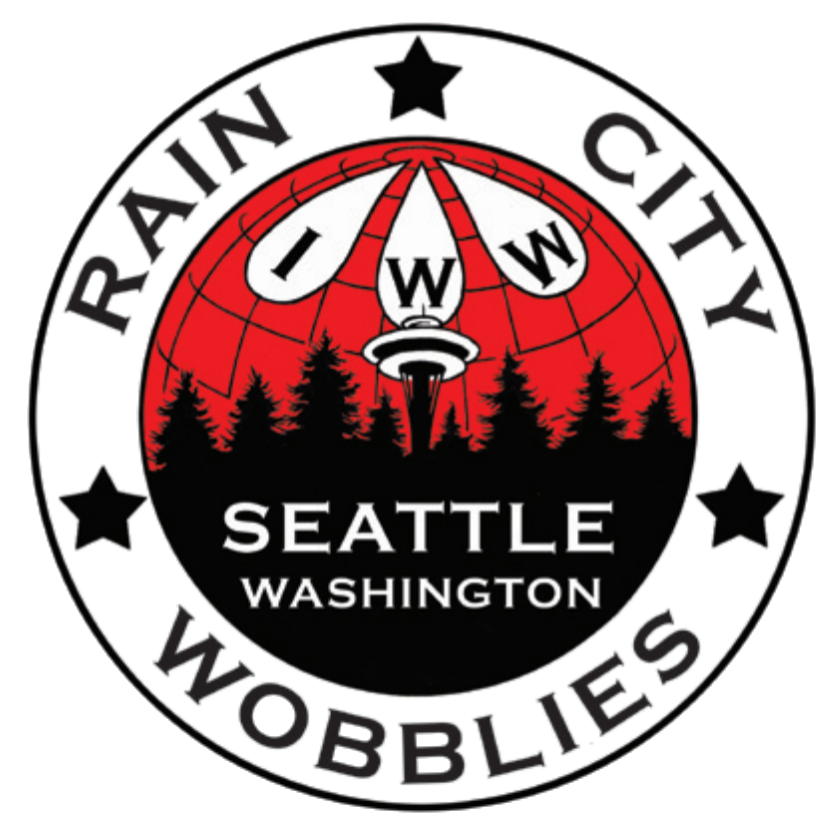 Seattle Industrial Workers of the World

The IWW has been organizing in the Puget Sound region for over one hundred years. The current Seattle General Membership Branch of the Industrial Workers of the World (IWW) was chartered in 1994. Since then, we have led a number of organizing drives in industries including retail, grocery, maritime, and food service. As a General Membership Branch we are open to workers in any industry.

There are several things that differentiate the IWW from nearly all other unions.

Solidarity unionism is direct, democratic, and mutually supportive. Our organizing model relies on workers taking action for themselves, rather than relying on legal wrangling and outside bureaucrats. This keeps power in the hands of the workers rather than staffers or lawyers. We might use legal mechanisms when appropriate, such as labor lawyers or the National Labor Relations Board (NLRB), but we aim to put workers in control of their own organizing. When you organize with the IWW, you will participate democratically in all decisions that affect you.

Industrial unionism organizes all workers in the same workplace (or even the same industry) into a single union rather than separating them into different unions based on job description. This allows all the workers in a workplace to organize together to win gains. It also allows us to support one another across businesses and prevents us from being pitted against each other in fights with bosses.

We Don’t Exclusively Rely on Contract Negotiations to Win Gains

The heart of solidarity unionism is direct action. Workers in their workplace can decide to take action against their bosses to win gains. Without being limited by contract negotiations and bureaucracy, our members make their own decisions about how to put pressure on their bosses for better working conditions and wages. If the workers decide a contract is best for them, we will support them in winning the best possible contract. A labor contract is only as strong as workers’ ability to enforce it, so we focus on building solidarity and organizing skills.

Other unions are in the business of unionism. They make money taking dues from their members. We’re not in this to make money. We’re in this to build solidarity with our fellow workers. Our dues are lower than any other union in the country, and they go toward maintaining the union and funding local organizing, not paying for political lobbying or supporting an army of paid officials. In the IWW, you will have direct democratic input on how your dues are spent. Dues are never deducted from anyone’s paychecks.

All the above distinctions were common among labor unions before workers were given the right to organize under federal law. Unfortunately, federal labor laws are now regularly broken by the bosses, and even the NLRB isn’t always very pro-worker. This, as well as general mismanagement of many labor unions, has led to a sharp decline in union membership. The IWW, by embracing the old ideas above, has bucked the trend. With around 4,000 members across North America, and many active branches overseas, we are reasserting ourselves in the global labor movement and bringing revolution into play.

Join the movement, and be part of the fight for better working conditions, better pay, and a world without capitalism.