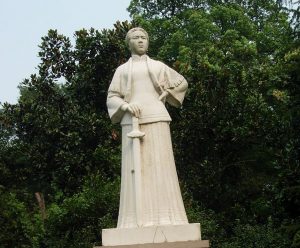 Qiū jǐn (November 8, 1875 – July 15, 1907) was a Chinese revolutionary, feminist, and writer. Qiu was executed after a failed uprising against the Qing dynasty, and she is considered a national heroine in China; a martyr of republicanism and feminism.

Jin’s art name is Jianhu Nuxia which literally translates to “Woman Knight of Mirror Lake.” At age 19, she was married, against her wishes in an arranged marriage.

She became involved with triads ( organized crime syndicates based in China, Hong Kong, Macau and Taiwan), who were then planning a rebellion against the Qing Dynasty and to resort the Han Chinese into leadership.

This was then, in 1903, she decided to move to Japan and study. There, she became fond of martial arts and became known for wearing Western male clothes and for her anti-Machu views. This led to her joining Guangfuhei, an anti-Qing group which later merged with other Chinese revolutionary groups to form Tongmenghui, led by Sun Yat-sun (another well-known figure in China). Jin was still in Tokyo at that time and was involved in the editorship of a journal where she expressed her views on bound feet and oppressive marriages, two issues she herself suffered.

In 1907, Jin was arrested and then tortured but she refused to admit her involvement. But upon discovery of documents that links her to the uprising, she was executed in her home village. After that, she became a symbol of women’s independence in China.