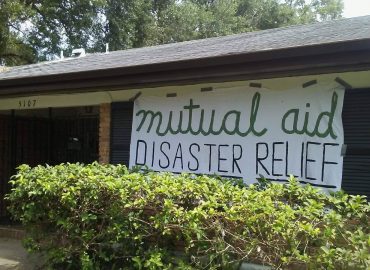 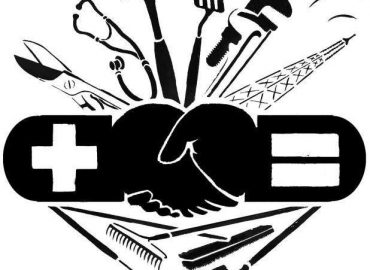 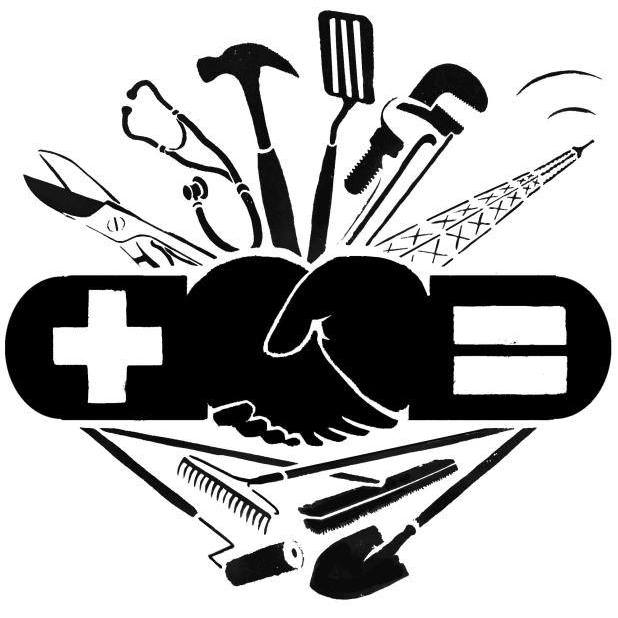 Our national network is made up of many eco-activists, social justice activists, global justice activists, permaculturalists, community organizers, and others who are actively organizing around supporting disaster survivors in a spirit of mutual aid and solidarity. It is a decentralized network, defined by the character and creativity of a multitude of communities and drawn together by our collective commitment to stand in solidarity with those impacted by disasters and turn the tide in favor of climate justice. We build our network through education and action. We are deeply moved by the Black Panther survival programs which served the aim of satisfying immediate needs while simultaneously raising people’s consciousness. Rooted in our history and experiences of social movement organizing we see our disaster relief work in the context of social struggle and believe that we must simultaneously address people’s immediate self-determined needs for survival and organize for fundamental shifts in the way we relate to each other and the earth.

Semi-autonomous working groups exist within the Mutual Aid Disaster Relief network to help drive certain aspects of our work forward. Some working groups are temporary and are formed around specific needs such as campaign research or location specific organizing. Other working groups are more permanent, such as supplies distribution, medical, animal rescue, environmental, permaculture, and media, communications. Working groups communicate via conference calls, emails, listservs, and/or on the ground and are a point of access where anyone in the network can become more involved in shaping the direction of Mutual Aid Disaster Relief. To get involved with a working group, or to start a new one, contact us at mutualaiddisasterrelief@gmail.com

In addition, we believe in horizontalism, decentralization and that the most effective decisions and actions take place at the level of those closest to the problem or most impacted by the solution. Therefore we strongly encourage the formation of affinity groups and, if needed, spokescouncils, to promote self-organization and autonomy within the Mutual Aid Disaster Relief network, especially in the event of a large disaster response mobilization.

New Orleans, a few days after Hurricane Katrina. In this apocalyptic atmosphere, here and there, life was reorganizing itself. In the face of the inaction of the public authorities, who were too busy cleaning up the tourist areas of the French Quarter, protecting shops, and responding with automatic rifles to demands for help from the poorer city dwellers, forgotten forms of community solidarity were reborn. In spite of occasionally strong-armed attempts to evacuate the area, in spite of white supremacist mobs hunting and killing unarmed black community members, a lot of people refused to leave the city. For those who refused to be deported like “environmental refugees” all over the country, and for those who came from all around to join them in solidarity, responding to a call from Malik Rahim, a former Black Panther, self-organization came back to the fore.

In a few weeks’ time, volunteer first aid first responders, called “street medics” for their work as first aid providers at protests, formed the Common Ground Clinic. From the very first days, this clinic provided free and effective treatment, including holistic, alternative, and western medicine to those who needed it, thanks to the constant influx of volunteers. The clinic, Malik’s house, and other newly formed Common Ground sites like the volunteer housing of those who came to clean and rebuild flooded homes became bases of daily resistance to the clean-sweep operation of government bulldozers, which were trying to turn parts of the city into a pasture for property developers.

People’s willingness to engage in direct action found a new context in defending public housing, re-opening shuttered school doors, delivering much needed supplies past checkpoints, and helping community members maintain their historic centers of worship despite the opposition of church hierarchies. The experience and wisdom gained from mass mobilizations against globalization melded with the legacy of the Black Panthers survival programs.  This practical knowledge accumulated in the course of several lifetimes of social movement practice all found a space where it could be deployed.

The devastation of New Orleans by Hurricane Katrina gave movements for liberation and others devoted to social transformation the opportunity to achieve an unfamiliar cohesion and unity that transcended the tired old divisions based on ideology or tactics. Street kitchens require building up provisions beforehand; emergency medical aid requires the acquisition of necessary knowledge and materials, as does the setting up of pirate radios. The political richness of such experiences is assured by the joy they contain, the way they transcend individual stoicism, and their manifestation of a tangible reality that escapes the daily ambience of order and work

Whoever knew the penniless joy of these New Orleans neighborhoods before the catastrophe, their defiance towards the state and the widespread practice of making do with what’s available wouldn’t be at all surprised by what became possible there. On the other hand, anyone trapped in the anemic and atomized everyday routine of our residential deserts might doubt that such determination could be found anywhere anymore.

Common Ground was not an activist utopia. Despite anti-oppression trainings and other limited attempts at stemming oppressive behavior, racism and sexism still were present. In addition, one early leader of Common Ground Relief, Brandon Darby, who later was revealed to be an FBI informant and agent provocateur, used his position of leadership to take advantage of young women, and alienated many people by his domineering misogynist tendencies, militant posturing and other poor behavior. When volunteers insisted that this problematic behavior be addressed, those people rather than the perpetrator were pushed out of the organization. The problems also extended far beyond one individual. Similar to how in disaster capitalism, the economic elite take advantage of the situation to further entrench their privilege and power and introduce neoliberal economic reforms, in disaster patriarchy, which was on full display in Common Ground, the sense of crisis and urgency was taken advantage of by people who used it as an excuse to bypass their principles for expediency. Valorization of hard and constant physical labor, a crisis-laden environment, militant posturing, minimization or degradation of emotion and basic human needs – these were all red flags that painted a toxic and unsustainable organizing culture and were not appropriately addressed. It takes a constant organizational self-awareness and willingness to critically reflect in order to not fall back into the trap of patriarchal, colonial, or other oppressive modes within organizing efforts.

These examples of Common Ground not living up to its ideals should not be glossed over or ignored. They are, in fact, critical to acknowledge and learn from. At the same time, it does not undo the critical, groundbreaking disaster relief solidarity work that Common Ground pioneered. It is often not a matter of whether manifestations of hierarchical power arise in our social movements and organizations, but when. When this does happen, it is critical to name it for what it is, and that this power be contested, opposed, and composted for something new to grow in its place.

Common Ground can be thought of as a mediating organization linking the traditional revolutionary organizing style of the Black Panthers and the diffuse leadership or horizontalism of Occupy Sandy. All three didn’t share decision-making power within their organizations equally, but all three did share power with the communities they were in support of, listening, asking, and responding to people’s needs, while articulating support for radical social change.

Fast-forward several years and an earthquake has just devastated Haiti. Most of us have left New Orleans and Common Ground and focused again on building other movements like the International Solidarity Movement, No Mas Muertes, Earth First! Rain Forest Action Network, Engineers Without Borders, Mountain Justice, the Beehive Collective, what became the Occupy Movement and countless others. But finding each other through acting directly and in concert with people affected to achieve their survival and other needs, besides giving us a heightened sense of inner power and fertilized imaginations, also built bonds that survived the years. Some people reconnected temporarily under the name Mutual Aid Disaster Relief in Haiti and sent several teams into Haiti providing medical care, supplies and assistance.

Many of us helped shut down Wall Street, however briefly, as part of the Occupy Movement and participated in local encampments. Occupy Wall Street began in New York’s Zuccotti Park in 2011, where a number of protesters attempted to take nonviolent direct action to shut down Wall Street and raise awareness about issues of economic injustice and inequality. Many of us also participated in Occupy Sandy, the grassroots disaster relief network that emerged out of Occupy to provide mutual aid to communities affected by Superstorm Sandy. Occupy Sandy programs included medical assistance, construction, a tool lending library, volunteer mold removal, free meals, distribution of aid, free legal help, a free store, educational services, and more. OpOK, Boulder Flood Relief, the examples are numerous and clear. Mutual aid and solidarity is far more effective and efficient than top down approaches. Even the Department of Homeland Security, ordinarily diametrically opposed to the work of anarchists, anti-authoritarians, anti-capitalists, and other dreamers of a better world, concedes the superior effectiveness of this horizontal, decentralized, network model compared to the top down command and control one.

Mutual aid disaster relief is a radical approach to disaster relief and to social movement organizing.  Mutual Aid Disaster Relief, the organization and network, acknowledges organizational failures of Common Ground and seeks to learn from those mistakes, build on lessons learned from decades of community-led disaster response, and ensure that best practices, relationships, and resources are ready to be deployed to support communities impacted by future disasters.

Reconnecting with such gestures, buried under years of normalized life, is the only practicable means of not sinking down with the world. The time has come when we take these up once more. Extreme storms are increasing in intensity and frequency. Climate change is threatening life as we know it. The time to build a permanent network to respond, from below and from the left, to these and other disasters is now, and we welcome you to help write that history with us.