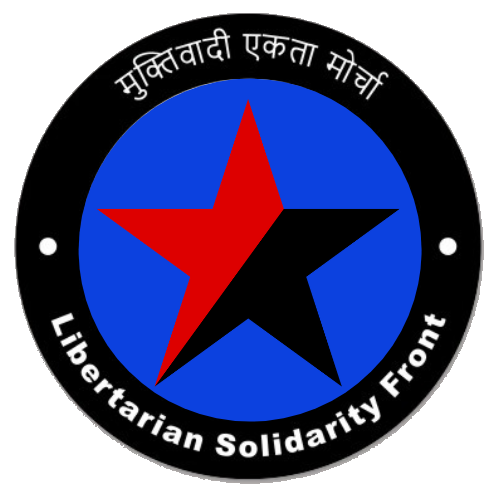 The Libertarian Unity Front is part of the International Labour Association (IWA-AIT).
PRINCIPLES AND AIMS.

MEM stands for the abolition of capitalist system of exploitation. Against its alienating labor, wage system and dictatorship of the boss, any managerial class or the state. We stand for control of the industry, its goods and, services by the workers and the communities.

MEM fights for the replacement of and hence abolition of the straitjacket of the modern nation states. On the one hand the state is the protector of the rich and the bosses, crushing the working class, the peasants and the tribal communities whenever the boss class demands. On the other hand by constant tutelage, control and violence it kills all human initiatives, solidarity and the full development of the individual and the community.

We are against any form of state, even as a means for worker and human liberation. A state can never liberate anyone and can only create a new despotism. We fight to replace this system of total control with the administration of things through the federation of community councils based on voluntary participation.

Mere ultimate social control over industry, land and society of all might not be enough to end this hierarchy of hierarchies. We also urge worker and community organizations to support the struggles of people who are oppressed on the basis of caste. We support the fight for economic and cultural equality and integration for the oppressed castes and religious communities today and for total abolition of the caste for a truly free and anarchist society.

MEM fights against patriarchy that has enslaved women and non-binary people into the worst kind of slavery. Like casteism, the sexism has divided the workers and human beings into “earner” and “depended”, concentrating wealth, privilege and social control in hands of straight men even within the exploited classes and castes.

We seek a social environment where people are not trapped by oppressive social norms but are free to develop sexual expressions, gender identities, and relationships that are right for them.

Because oppression based on sexuality and gender is distinct from class oppression, though linked to it, we support autonomous organization to end these forms of oppression. We also urge worker and community organizations to support the struggles of people who are oppressed on the basis of gender identity and consensual sexual relationships.

The boss class and the political elites are united globally to find cheaper resources, labor power and markets. With the support of local elites they at once strip the people of one nation of basic human rights, control over resources and life and, good paying jobs in other.

At the same time, direct military intervention and occupation in some countries and regions like Kashmir is killing thousands of workers, artisans and farmers. We support their struggle for political and social autonomy and self-determination, which is essential for any economic struggle, while also organizing for complete abolition of current political and economic regime without which the liberation is not complete.

To achieve the above stated goals, MEM takes the path of class struggle and revolutionary unionism.

Revolutionary unionism has a two-fold goal of 1) organizing workers for defense of immediate interests and obtaining improvement in their quality of life and 2) transforming by the means of Social Revolution to a Libertarian Communist, stateless society.

We move towards these goals by creating a structure in which there are neither leaders nor executive power. The revolutionary unions, with the community organizations are not only the means of struggle in current situation; they are also the foundational structures of the new and free society that we carry in our hearts.

Current labor movement in India is flooded with hierarchical unions with union leaders becoming an extension of the management and party affiliated unions, in which the workers are merely a tool for electoral gains. Most of these unions do not support the workers in most precarious jobs and informal jobs. These unions do not see as their task to overthrow the capitalist system by direct, organized yet spontaneous actions. They detest workers self organization and spontaneity – workers creative self-activity.

MEM, like other revolutionary unions fights for the abolition of the wage system and for the control of industry by the workers themselves organizing themselves in a federation of workers unions.

The class struggle is not limited to the workplace but also spreads out into the broader community, in areas like housing, gentrification, transportation, pollution, welfare rights, police brutality. To challenge the dominating classes in society, the working class needs a movement that can address these struggles and the issues of the day. We support the development of mass self-managed organizations in the community such as tenant organizations or transit rider unions.

The imminent climate catastrophe and ecological collapse of much of the natural world will either leave the workers in a horrifying situation and instability from all sides in an unplanned manner or will give them the challenge of transitioning from fossil fuel economy to a cleaner one. The process that has already started all over the world will at once be a struggle of survival for the working class and an opportunity to organize and achieve significant benefits during the transition. The possibility of better jobs and greater workers control in workplace is a possibility and the prospects of a Social Revolution are also not entirely missing.

Both the radical climate movement and the revolutionary workers’ movement share a similar vision of decentralized and regionally federated society and industry, tactics of direct action and, values of autonomy and pluralism. MEM fights for a Just Transition, more workers control and the possibility of the Social Revolution during this period of turmoil and decay.