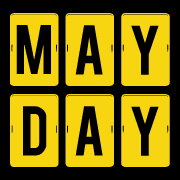 Mayday Space is a multi-story organizing center and social hub in Bushwick that works in tandem with our sister space Starr Bar a short walk away. Mayday is both a neighborhood resource and a citywide destination for engaging programming, a home for radical thought and debate, and a welcoming gathering place for people and movements to work, learn, celebrate and build together.

As an organizing center and events space for grassroots organizations to host their fundraiser parties, leadership retreats and more, Mayday inspires and sustains a justice-oriented community that is both publicly identifiable and approachable. We are creating a new innovative model that connects to the solidarity economy, promotes a shared sense of stewardship, and attracts new individuals to social justice politics in a culturally-dynamic setting.

As a movement project, Mayday also works with long-time community organizers to amplify neighborhood issues such as immigrant rights, food justice, tenants protections, gentrification and displacement as well as broader global issues such as climate justice and Internet freedom. To carry out this work, we’ve co-created empowering leadership structures for collectively managing the space and shaping the direction of our programming and organizing projects.

By offering access to our space on a sliding scale (down to free access), we prioritize people of color, immigrants, women-led groups, LGBTQ, poor and working class communities. The programming events Mayday will encourage and curate will likewise emphasize the voices, creativity and leadership of frontline communities.