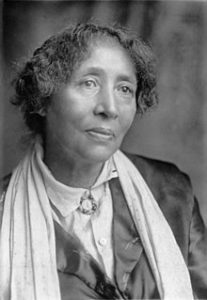 Lucy Eldine Gonzalez Parsons (c. 1853 – March 7, 1942) was an American labor organizer, radical socialist and anarcho-communist. She is remembered as a powerful orator. Parsons entered the radical movement following her marriage to newspaper editor Albert Parsons and moved with him from Texas to Chicago, where she contributed to the newspaper he famously edited—The Alarm.

Following her husband’s 1887 execution in conjunction with the Haymarket affair, Parsons remained a leading American radical activist, as a founder of the Industrial Workers of the World and member of other political organizations.

Lucy Parsons was born in 1853, in Buffalo Creek, Texas, although she listed Virginia as her birthplace on her children’s birth certificates. Her origins are poorly documented, and she gave different accounts at different times, so it is sometimes difficult to sort fact from myth.

Visit A Radical Shop to pick up the Radical Women of the World T-shirt series featuring Lucy Parsons.