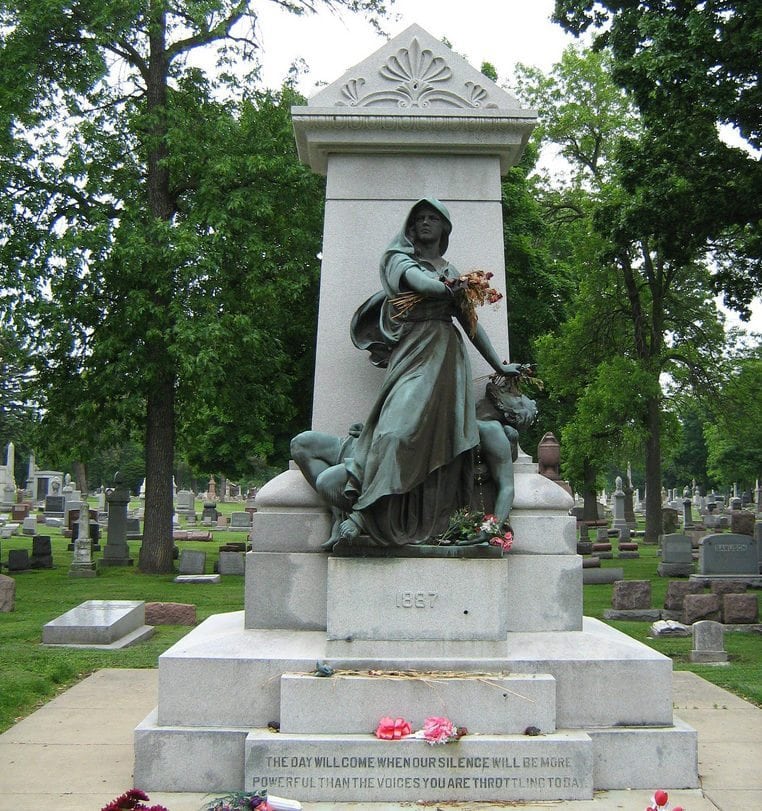 The “Haymarket martyrs”,were sentenced to death in the Haymarket affair came to be called among their sympathizers, were buried at Waldheim, later to become Forest Home Cemetery,  because it had a policy of not discriminating on the basis of race, ethnicity, or politics.

In addition, it was the only Chicago-area cemetery that would accept their remains.

After their burial, the cemetery became a place of pilgrimage for anarchists, leftists, and union members.

In 1893, the Haymarket Martyrs’ Monument, designed by sculptor Albert Weinert, was erected.

The trial, Illinois vs. August Spies et al., began on June 21, 1886, and went on until August 11.   There were eight defendants in this case, but seven were sentenced to death and one committed suicide and the other got a sentence of fifteen years in prison.

The five, August Spies, Adolph Fischer, George Engel, Louis Lingg, and Albert Parsons were killed by hanging on Nov. 11, 1887.   It is said that they sang the Marseillaise (anthem of the international revolutionary movement of the time), while they were marched to their execution.

On February 18, 1997, this monument was designated a National Historic Landmark.