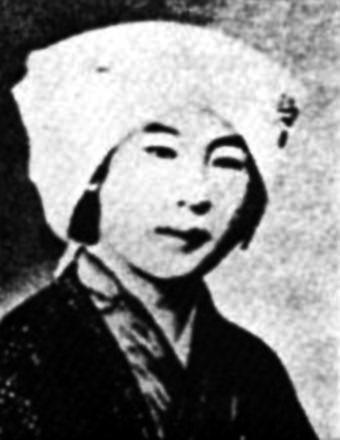 Fumiko Kaneko was a Japanese anarchist and nihilist. She was convicted of plotting to assassinate members of the Japanese Imperial family.
She was twenty-three when she died. She had a limited education and had grown up in an atmosphere in which patriotism and loyalty to the emperor were viewed as the moral core of Japanese life. She formulated a heretical social and political philosophy, and refused to grovel before the authorities is an extraordinary example of determination. She refused to cower before the prosecutors and judges, and she expressed her views candidly, courageously, and decisively.

In response to the officials who interrogated her after her arrest she wrote:
Having observed the social reality that all living things on earth are incessantly engaged in a struggle for survival, that they kill each other to survive, I concluded that if there is an absolute, universal law on earth, it is the reality that the strong eat the weak. This, I believe, is the law and truth of the universe. Now that I have seen the truth about the struggle for survival and the fact that the strong win and the weak lose, I cannot join the ranks of the idealists who adopt an optimistic mode of thinking which dreams of the construction of a society that is without authority and control. As long as all living things do not disappear from the earth, the power relations based on the principle [of the strong crushing the weak] will persist. . . . So I decided to deny the rights of all authority, rebel against them, and stake not only my own life, but that of all humanity in this endeavor.

Kaneko Fumiko wrote a memoir while in prison after being convicted of plotting to assassinate the Japanese emperor. Despite an early life of misery, deprivation, and hardship, she grew up to be a strong and independent young woman. When she moved to Tokyo in 1920, she gravitated to left-wing groups and eventually joined with the Korean anarchist Pak Yeol to form a two-person nihilist organization. Two days after the Great Tokyo Earthquake, in a general wave of anti-leftist and anti-Korean hysteria, the authorities arrested the pair and charged them with high treason. Defiant to the end (she hanged herself in prison on July 23, 1926), Kaneko Fumiko wrote the memoir as an indictment of the society that oppressed her, the family that abused and neglected her, and the imperial system that drove her to her death.