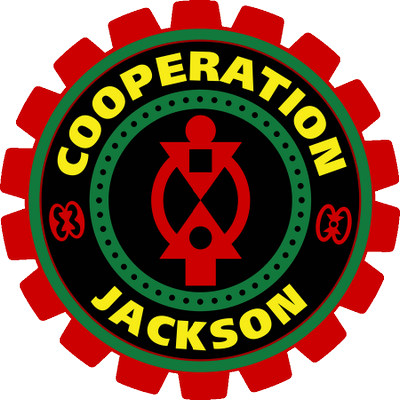 And the Kuwasi Balagoon Center for Economic Democracy and Sustainable Development

Our long term vision is to develop a cooperative network based in Jackson, Mississippi that will consist of four interconnected and interdependent institutions: a federation of local worker cooperatives, a cooperative incubator, a cooperative education and training center (the Kuwasi Balagoon Center for Economic Democracy and Development), and a cooperative bank or financial institution.

Cooperation Jackson’s basic theory of change is centered on the position that organizing and empowering the structurally under and unemployed sectors of the working class, particularly from Black and Latino communities, to build worker organized and owned cooperatives will be a catalyst for the democratization of our economy and society overall.

Cooperation Jackson believes that we can replace the current socio-economic system of exploitation, exclusion and the destruction of the environment with a proven democratic alternative. An alternative built on equity, cooperation, worker democracy, and environmental sustainability to provide meaningful living wage jobs, reduce racial inequities, and build community wealth. It is our position and experience, that when marginalized and excluded workers and communities are organized in democratic organizations and social movements they become a force capable of making transformative social advances.

The Kuwasi Balagoon Center is the coordinating base for Cooperation Jackson, its overall operations and administrative offices. The primary function of the Balagoon Center is to host the various cooperative development activities of the organization including, community orientation meetings, general membership meetings, working group meetings, trainings and skill shares.

We’ve renamed the Center in honor of Kuwasi Balagoon who embodies the vision and work of Cooperation Jackson. Kuwasi Balagoon is a New Afrikan anarchist / Vietnam War vet / former NYC Tenant Organizer / a queer Black man / Black Panther Party for Self-Defense BPPSD member who was forced underground due to heightened state repression and framing of BPPSD members [see: cointelpro / Panther 21 case]. Balagoon became a Black Liberation Army member who lived an uncompromising life in every way shape and form. he was a citizen of the Republic of New Afrika, and did everything in his power to “Free the Land” and actualize the collective vision of a Black Nation. he broke out of jail and prison multiple times, also freed comrades from the walls multiple times. the monies expropriated from the banks were used to fund the breakfast and health programs of the Black Panther Party and the Young Lord Party. People who knew Kuwasi say that he was never in the closet about his sexuality, in a time when that wasn’t socially acceptable.

Baba Kuwasi’s life embodies Cooperation Jackson’s Build and Fight strategy of contesting the state, while in the same breadth building sustainable communities that will have the capacity to determine our own exchange value(s) irrespective of capitalist markets and influence.