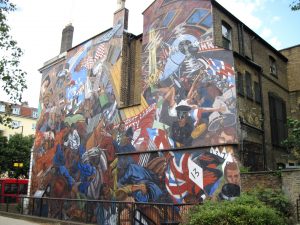 The Cable Street Mural is a large mural painting in Shadwell in East London. It was painted on the side of former St George’s Town Hall by Dave Binnington, Paul Butler, Ray Walker and Desmond Rochfort between 1979 and 1983 to commemorate the Battle of Cable Street in 1936. The original design was by Dave Binnington.

The work is inspired by the social realism of Diego Rivera. Using a fisheye perspective, it shows the violent confrontation between police and protesters, with protest banners, punches being thrown, a barricade of furniture and overturned vehicle, police horse, and a police autogyro overhead. It uses the same artistic devices as Goya’s The Third of May 1808 to evince sympathy for the protesters, showing them full face but a back view of the police.

About the Battle of Cable Street

The Battle of Cable Street was an event that took place in Cable Street and Whitechapel in the East End of London, on Sunday 4 October 1936. It was a clash between the Metropolitan Police, sent to protect a march by members of the British Union of Fascists led by Oswald Mosley, and various anti-fascist demonstrators, including local anarchist, communist, Jewish and socialist groups. The majority of both marchers and counter-protesters travelled into the area for this purpose.

It became known that the British Union of Fascists (BUF) were organising a march to take place on Sunday 4 October 1936, through the heart of the East End (an area which then had a large Jewish population). Mosley planned to send thousands of marchers dressed in their Blackshirt uniform through the East End. An estimated 100,000 residents of the area petitioned then Home Secretary John Simon to ban the march because of the strong likelihood of violence. He refused, and sent a police escort in an attempt to prevent anti-fascist protesters from disrupting the march.

The Board of Deputies of British Jews denounced the march as anti-semitic, and urged Jews to stay away. Phil Piratin, a member of the local branch of the Communist Party of Great Britain, quickly organised opposition forces.

The anti-fascist groups built roadblocks in an attempt to prevent the march from taking place. The barricades were constructed near the junction with Christian Street in Stepney, towards the west end of this long street. The main confrontation took place around Gardiner’s Corner in Whitechapel. An estimated 20,000 anti-fascist demonstrators turned out, and were met by 6,000–7,000 policemen (including mounted police), who attempted to clear the road to permit the march of 2,000–3,000 fascists to proceed. The demonstrators fought back with sticks, rocks, chair legs and other improvised weapons. Rubbish, rotten vegetables and the contents of chamber pots were thrown at the police by women in houses along the street. After a series of running battles, Mosley agreed to abandon the march to prevent bloodshed. The BUF marchers were dispersed towards Hyde Park instead while the anti-fascists rioted with police. About 150 demonstrators were arrested, although some escaped with the help of other demonstrators.