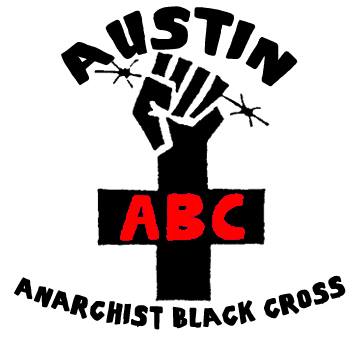 The Austin Anarchist Black Cross (ATX ABC) is a revolutionary anarchist collective. We oppose all forms of oppression, including, but not limited to: transphobia, sexism, homophobia, racism, patriarchy, colonialism, ableism, speciesism, capitalism, and the state. As anarchists, we see the abolition of prisons and the police as central to deconstructing white supremacy and capitalism. We understand that these struggles are related, and it is our top priority to actively work to destroy prisons and the hierarchies that support them.

Austin ABC operates through anarchist principles of direct action, mutual aid, solidarity, and accountability. We reject forms of punishment that reflect the prison industrial complex, such as putting people in cages or branding them as “felons” for life. Instead, we seek to hold each other and our communities accountable for liberating our interactions and relationships from the systems that oppress us. We are not a reformist organization, but we understand and recognize that prison abolition is a long struggle. We value the work that is being done towards reforms that will improve the daily lives of those that are incarcerated, even though reform does not align with our principles.

Historically, Austin ABC has been focused on political prisoner support. We openly support those who have committed “illegal activities” as acts of resistance and opposition.

Prison is a dehumanizing and isolating experience, and for that reason ABC places focus on working to re-humanize prisoners and build friendships and communication with them. Writing to prisoners and building pen pal relationships is one of the ways we work to do this. To see our current list of pen pals, please visit our Pen Pal page or the Radical Alliance for Queer and Trans Prisoners blog, part of an ongoing collaboration with Houston ABC. We seek to be intentional and deliberate in nurturing these relationships, so please be mindful of the commitment you are willing to make when seeking a pen pal, as that person may be serving anywhere from a few months to a life sentence. Austin ABC also works to prioritize supporting the family and friends of those that have been imprisoned.