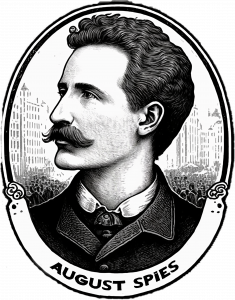 August Spies, a prominent figure in American anarchism and a martyr for the cause after being executed for his involvement in the Haymarket riot, resided at 154 Potomac Ave in Wicker Park. Today, the address is listed as 2132 W. Potomac on maps.

August Spies, also known as August Vincent Theodore Spies, was a prominent figure in American anarchism during the late 19th century. He is best known for his role in the Haymarket riot of 1886, a violent incident that occurred during a labor strike in Chicago.

Spies was born in Germany in 1855 and immigrated to the United States in 1873. He quickly became involved in the labor movement and advocated for the rights of workers. He was a vocal critic of capitalism and believed in the power of the working class to overthrow the capitalist system.

In May 1886, Spies and other anarchists organized a rally in Chicago’s Haymarket Square to support striking workers. The rally was peaceful until the police arrived and attempted to disperse the crowd, at which point a bomb was thrown and several people were killed. Spies and several other anarchists were arrested and charged with murder.

Spies lived in Wicker Park, Chicago, and resided at 154 Potomac Ave. The address of the house is today 2132 W. Potomac.

Today, Spies is remembered as one of the most important figures in American anarchism and his execution is considered a defining moment in the history of labor rights in the United States.