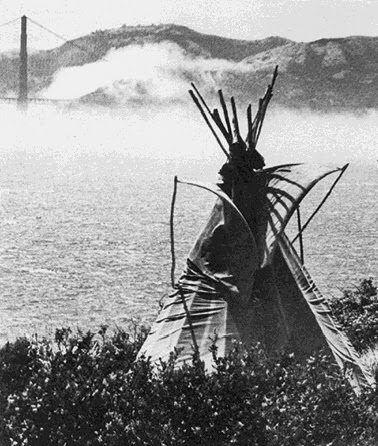 The Occupation of Alcatraz was an occupation of Alcatraz Island by 89 American Indians who called themselves Indians of All Tribes (IOAT). According to the IOAT, under the Treaty of Fort Laramie (1868) between the U.S. and the Lakota, all retired, abandoned or out-of-use federal land was returned to the Native people who once occupied it. Since Alcatraz penitentiary had been closed on March 21, 1963, and the island had been declared surplus federal property in 1964, a number of Red Power activists felt the island qualified for a reclamation.
The Alcatraz Occupation lasted for nineteen months, from November 20, 1969, to June 11, 1971, and was forcibly ended by the U.S. government. The Occupation of Alcatraz had a direct effect on federal Indian policy and, with its visible results, established a precedent for Indigenous activism.

In the early morning hours of November 20, 1969, 89 American Indians, including over 30 women, students, married couples and six children, set out to occupy Alcatraz Island. A partially successful Coast Guard blockade prevented most of them from landing, but fourteen protesters landed on the island to begin their occupation.

At the height of the occupation there were 400 people. Native and non-native people brought food and other necessary items to the people on the island, but the coast guard’s blockades made it increasingly difficult to supply the occupants with food. The suppliers, after stealthily journeying across the bay via canoe, dropped off the supplies which then had to be carried up steep ladders. The occupation lasted about 19 months and ended peacefully.

The protesters, predominantly students, drew inspiration and tactics from contemporary civil rights demonstrations, some of which they had themselves organized. The original fourteen students who occupied the Island were LaNada Means War Jack, Richard Oakes, Joe Bill, David Leach, John Whitefox, Ross Harden, Jim Vaughn, Linda Arayando, Bernell Blindman, Kay Many Horse, John Virgil, John Martell, Fred Shelton, and Rick Evening. Jerry Hatch and Al Miller, both present at the initial landing but unable to leave the boat in the confusion after the Coast Guard showed up, quickly turned up in a private boat. The first landing party was joined later by many others in the following days, including Joe Morris (a key player later as a representative of the Longshoreman’s Union, which threatened to close both ports if the Occupiers were removed), and the man who would soon become “the Voice of Alcatraz,” John Trudell.

After a fire destroyed a San Francisco Indian center and Interior Secretary Walter J. Hickel offered to turn Alcatraz into a national park, the protesters mobilized.

Although she would not receive the same recognition from mainstream media as Trudell and Oakes would, LaNada Means, who was one of the first to arrive and one of the last to leave, organized written statements and speeches that outlined the purpose of the occupation. To the media and to the federal government, Means made it clear that the occupiers wanted complete Indian control over the island, under the Treaty of Fort Laramie, for the purpose of building a cultural center that included Native American Studies, an American Indian spiritual center, an ecology center, and an American Indian Museum. According to Means’ grant proposal, the center would include full-time Indian consultants, Indian teachers, Indian librarians, and an Indian staff leading people around the center in order to tell the story of Indians of All Tribes. The occupiers specifically cited their treatment under the Indian termination policy and they accused the U.S. government of breaking numerous Indian treaties.

Richard Oakes sent a message to the San Francisco Department of the Interior:
“We invite the United States to acknowledge the justice of our claim. The choice now lies with the leaders of the American government – to use violence upon us as before to remove us from our Great Spirit’s land, or to institute a real change in its dealing with the American Indian. We do not fear your threat to charge us with crimes on our land. We and all other oppressed peoples would welcome spectacle of proof before the world of your title by genocide. Nevertheless, we seek peace.”
President Richard Nixon’s Special Counsel Leonard Garment took over negotiations from the GSA.

On Thanksgiving Day, hundreds of supporters made their way to Alcatraz to celebrate the Occupation. In December, one of the occupiers, Isani Sioux John Trudell, began making daily radio broadcasts from the island, and in January 1970, occupiers began publishing a newsletter. Joseph Morris, a Blackfoot member of the local longshoreman’s union, rented space on Pier 40 to facilitate the transportation of supplies and people to the island.

Cleo Waterman (Seneca Nation) was president of the American Indian Center during the takeover. As an elder, she chose to stay behind and work on logistics to support the occupiers. She worked closely with Grace Thorpe and the singer Kay Starr to bring attention to the occupation and its purpose.

Grace Thorpe, daughter of Jim Thorpe (Sac and Fox), was one of the occupiers and helped convince celebrities like Jane Fonda, Anthony Quinn, Marlon Brando, Jonathan Winters, Buffy Sainte-Marie and Dick Gregory, to visit the island and show their support. Not only did Thorpe bring both national and international attention to the occupation, she also provided supplies necessary to keep the occupation alive. Thorpe gave a generator, water barge and an ambulance service to the island. Rock band Creedence Clearwater Revival supported the Occupation with a $15,000 donation that was used to buy a boat, named the Clearwater, for reliable transport to Alcatraz.