Flush the Anti Terrorist Law – Solidarity with the Philippines

Around the globe, communities are seeing the rise of authoritarianism driven by corporate interests in the form of anti-terrorism bills, laws, and regulations.  In the United States, we saw (and continue to see) deliberate efforts to use anti-terrorism as a way of silencing those who challenge capitalism.

In addition to the  Patriot Act, which enacted after the 9-11-2011 attacks in New York City, made changes to surveillance laws that made it easier for the government to spy on ordinary Americans by expanding the authority to monitor phone and email communications, collect bank and credit reporting records, and track the activity of innocent Americans on the Internet.  They also created the Animal Enterprise Terrorism Act which labeled and charge anyone who created economic damage or interfered with the operations of an animal enterprise as a terrorist.  This means animal rights activists across the board became suspect because the law was so vague it allowed animal enterprises the power to  ‘prove’ an activist caused damage to their business/enterprise.  This put a chilling effect on the entire movement in the U.S. and sent several people to federal prison for simple acts such as running a website that focused on an animal testing lab (See Shac 7).   Today, we are seeing it again with the Trump administration and its actions and violence towards protesters speaking up for black lives. 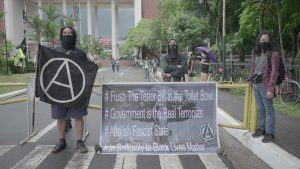 We can see similar actions taken by the government around the world, in Brazil, in Germany, in China, just to name a few. Recently, the Philippines just passed an anti-terrorism law, known as The Anti-Terrorism Act of 2020.  The law was signed by President Rodrigo Duterte on July 3, 2020, and effectively replaced the Human Security Act of 2007 on July 18, 2020.  This law intends to “prevent, prohibit, and penalize terrorism” in the Philippines.  Just like all of the terrorist laws in other countries, this one is also so vague in the language that it gives the government the power to treat anyone as a terrorist and will be used to silence and target dissent.

An example of the language in The Anti-Terrorism Act of 2020 reads;

“SEC. 29. Detention Without Judicial Warrant of Arrest. – The provisions of Article 125 of the Revised Penal Code to the contrary notwithstanding, any law enforcement agent or military personnel, who, having been duly authorized in writing by the ATC has taken custody of a person suspected of committing any of the acts defined and penalized under Sections 4, 5, 6, 7, 8, 9, 10, 11 and 12 of this Act, shall, without incurring any criminal liability for delay in the delivery of detained persons to the proper judicial authorities, deliver said suspected person to the proper judicial authority within a period of fourteen (14) calendar days counted from the moment the said suspected person has been apprehended or arrested, detained, and taken into custody by the law enforcement agent or military personnel. The period of detention may be extended to a maximum period of ten (10) calendar days if it is established that (1) further detention of the person/s is necessary to preserve evidence related to the terrorism or complete the investigation; (2) further detention of the person/s is necessary to prevent the commission of another terrorism; and (3) the investigation is being conducted properly and without delay.”

People are taking to the streets to demand removing this law.  The video above has been created by a group of people in the Philippines, known as the Local Autonomous Network (LAN), to document what is happening and to call for international solidarity. LAN  shared the video with A Radical Guide to help raise awareness and support around this issue, to FLUSH THE ANTI-TERRORIST BILL.

No matter where we are in the world, we are in this together and will stand together to dismantle these oppressive systems of capitalism and colonialism.  A Radical Guide stands with love and solidarity with our comrades and the people of the Philippines.