The Philippines government is on the verge of enacting an Anti-Terrorism law that will eliminate critical legal protections and permit government overreach against groups and individuals labeled terrorists, here is a report from comrades on the ground in the Philippines.

At this moment in time, abuse of power and the dominance by police, military, politician, and State itself become common practices in different parts of the world. In the US, the police killed George Floyd in broad daylight with witnesses standing in front of them. The urge to repress the breathing of a human being justify how State’s forces cruel intention towards its people. This kind of killing and violence made by the police, military, and authority in uniform in many parts of the world shows how savagery and dangerous living under this system. In the Philippines alone, more than 20,000 lives were lost since 2016 in the so-called War on Drugs instigated by the State. In the history of humankind, you cannot make an assurance living peacefully while at the same time having police or military in your community because these people are being summoned by the State to suppress and oppress the people, being an authority gives them an entitlement to use their guns in any way possible. It is very clear for an ordinary citizen to see how authorities behave, they are not here “to protect and serve”, they are just here to show their power over their people. That’s the very essence of “Authority”.

While the Philippines are struggling with the Covid 19 pandemic crisis; still most of the people cannot go back to work, health services are declining, starvation and hunger are experienced by most of the population, with no clear plan how to stop the pandemic and yet politician in the Senate and Congress are busy passing Anti-Terrorism Bill. One of the gravest misconducts made by the politician, instead of helping many communities affected by the health crisis they focus their power on decision-making to secure their property, position, and interest and leaving most of the people in despair and agony.

June 12, 2020, As we celebrate, Independence Day. Many people showed up to protest and voice out their grievances specifically against the Anti-Terrorism Bill and the incompetency of the government to address the issue of the Covid 19 pandemic. The venue of the demonstration is in University of the Philippines Diliman Quezon City, the government warns the public not to do public mass gatherings as it will violate the quarantine restriction and they deploy police in uniforms in all the entry points going to UP Diliman to intimidate and harass the people from participating.

What we are experiencing now is a clear manifestation of how State/Government functions, it is undoubtedly that the State is not here to serve the people but for us to be in an unlivable community threaten by fear and terror with the use of their police and military as their private armies. 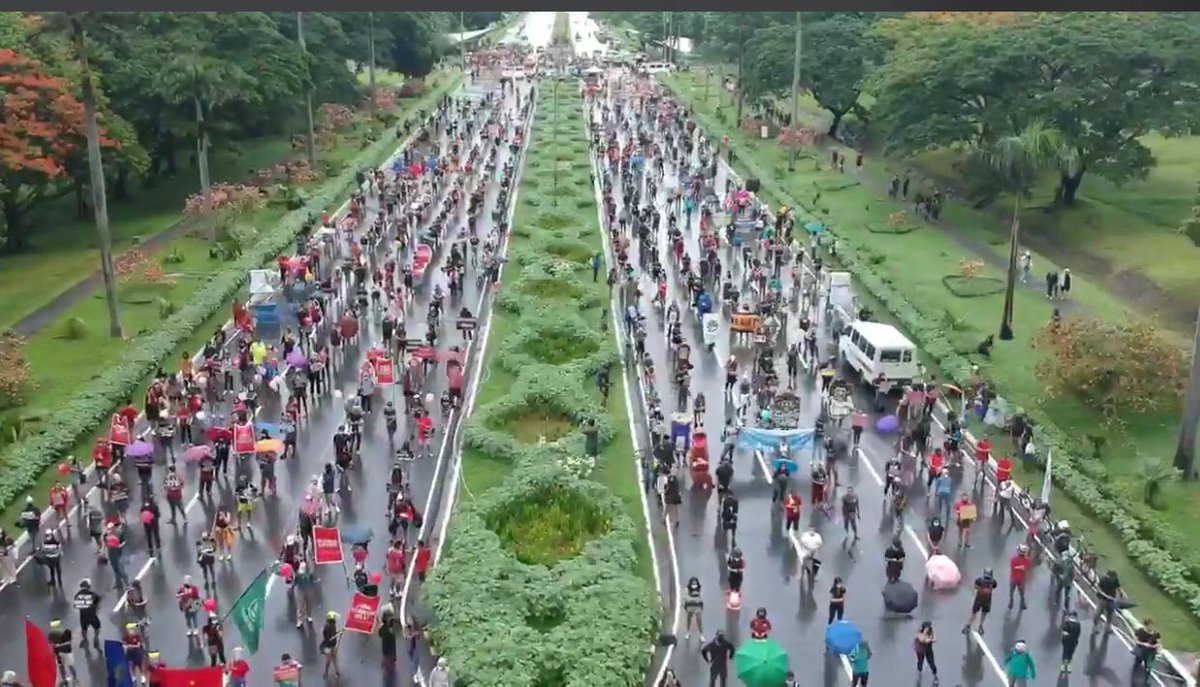 The Anti-Terrorism Bill can be interpreted in a lot of ways and with a lot of loopholes on it, there is a guarantee that this bill will be abused by the people in power. There is no clarity to ensure the public that their rights will not be violated.

Some of the questionable provisions in the bill:

“Provided, That, terrorism as defined in this Section shall not include advocacy, protest, dissent, stoppage of work, industrial or mass action, and other similar exercises of civil and political rights, which are not intended to cause death or serious physical harm to a person, to endanger a person’s life, or to create a serious risk to public safety. “

“SEC. 29. Detention Without Judicial Warrant of Arrest. – The provisions of Article 125 of the Revised Penal Code to the contrary notwithstanding, any law enforcement agent or military personnel, who, having been duly authorized in writing by the ATC has taken custody of a person suspected of committing any of the acts defined and penalized under Sections 4, 5, 6, 7, 8, 9, 10, 11 and 12 of this Act, shall, without incurring any criminal liability for delay in the delivery of detained persons to the proper judicial authorities, deliver said suspected person to the proper judicial authority within a period of fourteen (14) calendar days counted from the moment the said suspected person has been apprehended or arrested, detained, and taken into custody by the law enforcement agent or military personnel. The period of detention may be extended to a maximum period of ten (10) calendar days if it is established that (1) further detention of the person/s is necessary to preserve evidence related to the terrorism or complete the investigation; (2) further detention of the person/s is necessary to prevent the commission of another terrorism; and (3) the investigation is being conducted properly and without delay.”